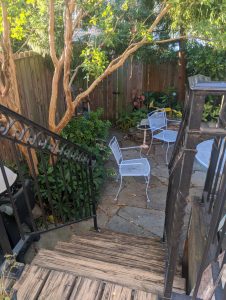 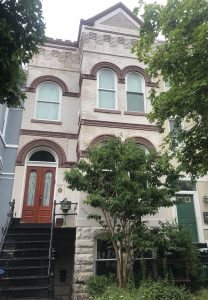 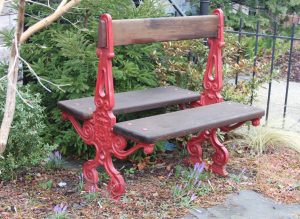 630 E Street, NE, celebrates the out of the ordinary. The fun begins in the front yard with a bright red double-faced bench under a late-flowering ornamental tree. Found in a Denver antique store, the bench’s naval-themed bas-relief motif was rediscovered after many layers of lead paint were striped away. An easily overlooked sailing ship hides on the side of the red legs. The bench isn’t in its final resting place, however. Patrick Crowley, the home owner, has decided this bench will be installed above his gravesite, “so others might rest in peace.”

Don’t let this 1881 structure fool you, the only old thing left inside is the molding around the front door and windows. Everything else dates from the 1999 renovation. This home and the adjoining house to the East had been gutted and joined to form a Pentecostal church that served the neighborhood for 32 years. Patrick designed the floor plan and oversaw much of the renovation, including the removal of a ten-foot 1960s addition tacked onto the back of the house.

Did you catch the giant jail-house keys hanging by the front door, to the right of the map? Keep your eyes peeled for the whimsical odds and ends throughout the house. For example, the Brooklyn Bridge painting in the foyer, by Houston (via Alviar Studio) is painted on the back of the glass – in reverse order: foreground first, background last. The map of Capitol Hill is by Eastern Market artist Mary Belcher.

Color is a hallmark feature of Patrick’s home. The yellow vertical-striped faux-finish paintwork in the living room is the work of Michael Norris (a local artist who currently resides in Palm Springs). Norris’ perfect touch is also seen in the back gammon themed diamonds below the chair rail in the dining room and in the faux-grained wood doors throughout the house. Be sure to look up in the powder room at the checkered ceiling – Norris swore he would never do it again!

Despite its youth, the home has an old soul feel created by the pilaster columns that separate rooms and the oversized antique pieces that dominate the12-foot tall living room. The massive 20th Century armoire just inside the front door was originally a foot shorter. An extra footer was added to make the mirror work for six-foot Patrick. Note the bas-relief artwork on the armoire is repeated in the tromp L`oeil paint work at the top of the front windows by artist Bryan King of Artiface Inc. of Arlington, VA.

The almost twin 19th Century American Renaissance glass-doored bookshelves flanking the gas-fed fireplace were almost lost to powder post beetles shortly after they arrived. Patrick sent them off to a three-month fumigation spa to save them. The tiny pock holes are the signs of beetle infestation. The oak drop-leaf gate-legged dining table (another Eastern Market find) in the front bay now serves as Patrick’s Covid-19 home office. The Merlot colored leather living room furniture came from Crate & Barrel. The oriental carpets were purchased at the old Tracadero’s off Dupont Circle.

On the living room mantle are two tall vases purchased at the Baltimore Craft Fair. The skeleton keys collection dates to Patrick’s days at Congressional Cemetery. The bust, inherited from Patrick’s mother, was brought back from Italy by Patrick’s father after serving in WWII. Across the room at the bottom of the stairs is a striking self-portrait by artist Terri Maxwell Lipp. Lipp also painted Patrick’s Mother, Catherine Crowley, in the center room and Patrick as a 19th Century Gentleman above the drop-leaf secretary.

In 2014 a long-awaited project was begun: that of opening interior walls put in by the developer in both the upstairs and downstairs front window bays. What was revealed are the beautiful, original, historic moldings you see today. Patrick installed the historically accurate arched windows (up and downstairs). The windows across the back of the house were installed just this year. The pilaster columns framing the bay window sitting area were built under the direction of Merlino Construction, transitioning from the sheet rock walls of 1999 to the original plaster walls.

The center room holds numerous other prized possessions of the owner (a Taurus you may have guessed). The tall “Reading Dog” is the work of local artist Bobby West. “Leap of Faith” was purchased in Santa Fe. The fine china in the three-door cabinet was inherited from his parents. The books on the left are all signed first editions, mostly by local authors, purchased at the annual Eastern Market Book Fair. The new gray tweed furniture came from Mitchell Gold on 14th Street, NW.

As you pass through a short hallway toward the kitchen, note the community achievement awards presented to Patrick by Congressional Cemetery and the Capitol Hill Community Foundation. Also in the passage is Patrick’s collection of world globes run the gamut from 1970s era children’s saving banks to Rube Goldberg Spinning contraptions to serious collector pieces. Three stand out as prize pieces: the 1881 Merzbach & Falk which displays Africa before its colonization demarcations (third from right on top shelf); the 1851 E.Andriveau-Goujon which shows Algeria as the first French African colony (right hand first shelf set in brass stand); 1920s era Hungarian “A Fold” that focuses on Asian political boundaries.

The kitchen at the back of the home provides drama with a backsplash, wall, and ceiling of gold-painted embossed Anaglypta. The pottery in the oak cabinet is mostly from Eastern Market potters

The kitchen leads to the much-used backyard with a newly rebuilt stone garden wall (Ginkgo Gardens) and decorative steel railing built by Craftsman Ironworks. The yard was designed by Geoff Lindstrom.

The upstairs hallway also shows the owner’s love of art. His own drawings are on display on the wall. (Patrick serves on the board of the Capitol Hill Arts Workshop.) Please enjoy the oversized detail of Gustave Callebotte’s “Paris Street; Rainy Day” that was once hanging along Michigan Avenue outside the Art Institute of Chicago.

Down the hall, the master bedroom faux parchment paper wall treatment was done by Brian King, and the master bathroom skylight flaunts a “high flying” stained glass kite, along with an extra long claw-footed tub and wall spout. In the master bedroom, you again see the beautiful sitting area that was opened up in 2014 to allow the historically accurate arched windows to be installed and the home brought back to original authenticity and beauty.