This lecture, originally scheduled for Friday, March 27, 2020, will not take place as planned. Information on rescheduling will be posted as it becomes available.

The winner of the 2020 Dick Wolf Prize is Nicholas Malin. His paper, “RFK Stadium: From the Past to the Future,” provides a layman’s explanation of historic preservation and what that means if the stadium is transferred to the District of Columbia. His focus is on the historic context of sports stadiums, with emphasis on the unique history of RFK, and how that might inform us about the future of RFK Stadium in terms of its eligibility for historic preservation and future uses. 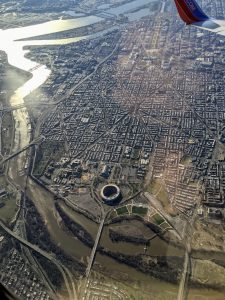 Nick is a graduate of Georgetown University Law Center and the University of Michigan, and currently serves as an attorney for the Office of the Deputy Mayor for Planning and Economic Development (DMPED). During law school, Nick took great interest in real property law, land use law, environmental law, and historic preservation law. Nick hopes that his legal career will continue to be defined by his commitment to public service.

The Dick Wolf Memorial Lecture is  an annual event to showcase excellence in research and writing on urban planning and historic preservation in the District of Columbia by a student or intern. The winner delivers a presentation and receives a $1,000 prize.

Dick Wolf (1933-2012) was one of the District’s most ardent and effective visionaries. After moving to Capitol Hill in 1964, he worked tirelessly and effectively on community planning (including the Comprehensive Plan), historic preservation, and sound neighborhood development. He served on the CHRS Board for many years, most often as President, and also served on the Committee of 100 of the Federal City. His vision for Washington was of a great, world-class city that houses both the nation’s great institutions as well as families with young children; balances its appetite for massive growth with preservation of the character of its irreplaceable historic residential neighborhoods; and integrates sound, sustained city planning principles, practices and administrative processes into all the city’s business.