The Historic Preservation Review Board (HPRB or the Board), considered this case at its virtual hearing on March 4, 2021. CHRS testimony: 631 G St.SE HPA21-177 (03/04/2021)  HPRB is responsible for determining if proposed changes to a building are consistent with the DC Preservation Act.  A “concept review” is a preliminary determination of a building owner’s plan to alter the building, and if the concept is approved, the owner will return to the HPRB for a final review.

631 G Street SE, HPA 21-177, concept/second story addition to garage.  The applicant plans to add a second story (an apartment) to an existing one-story garage, in an alley with several one- and two-story garages of varying age, mostly brick and in a somewhat industrial aesthetic.  The houses on the rear of Ellen Wilson Place, SE (built in 2000) facing this alley are two stories with symmetrical gable roofs.  The new garage roof would be an asymmetrical gable roof and while it differs from the more typical flat roofs on other garages in this alley, we believed that it is appropriate in this context. The garage would be 20 feet tall, within HPRB height guidelines.  The Board found the design solution for the second story addition compatible and appropriate for the specific context of this alley. 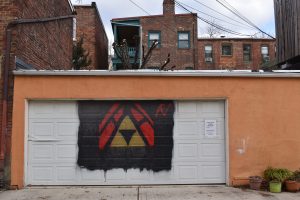 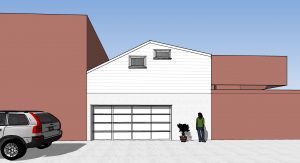