Justine Bello, Architectural Conservator, presented “Adaptive Reuse of Our Alley Buildings”  May 19, 2021. Here is a link to a map of repurposed alley buildings.

On May 19, Justine Bello, architectural conservator, took CHRS members on a virtual tour of how Capitol Hill residents and business owners have revised, adapted, and preserved the buildings that grace our many alleyways. While these Capitol Hill buildings do not adorn our typical street views, Bello explained that they have contributed to the footprint and function of our community since they were built in the 19th century. They possess great value and make our community unique and special.

Bello praised The DC Historic Alley Buildings Survey which Kim Protho Williams, architectural historian and National Register coordinator, completed for the DC Historic Preservation Office in 2014. Bello explained that this project documents the importance of the need to preserve our historic cultural alley buildings. Protho Williams registered 1,249 alley buildings that fall within, and just beyond, the boundaries of the original L’Enfant Plan. Their numbers are dwindling and the Capitol Hill historic district is the location for 517, the vast majority, of the city’s remaining alley buildings. Georgetown follows with 253, Dupont Circle has 101, U Street has 82, Shaw has 74, and 14th Street has 74.

Bello invited attendees to open their eyes the next time they walk down one of our historic alleys. She stressed that you do not need to be an expert to witness the defining features, and salient characteristics of the buildings: the general maxim holds true that “form follows function.” Our alleys were designed to provide access to the rear of the large lots and housed the kitchens, stables, carts, wagons, and animals, along with other dependency buildings, equipment and storage areas.

The oldest alley buildings, constructed before 1878, were almost exclusively stables. Most were privately built by and for individual homeowners and speculative builders, located in the alleys behind primary residences. Bello explained that horses were housed, harnessed, and fed in the stables, while the carriage houses were used to store the carriages and serve as the living quarters for the coachmen, grooms, and stablemen. Most stables were two-story, brick structures with a wide carriage door and pedestrian door on the first floor, and a hayloft opening and windows on the second story. Take a look upwards and you can sometimes see a short beam above the large window-like opening, which was used to hold the block and tackle that would hoist the hay bales up to their storage place on the second floor. You can often see small window openings built along the side of the building, so the horses inside could poke their heads out of their stalls to get some fresh air and take in the view.

As car ownership began to rise after 1920, some Capitol Hill homeowners replaced the stables behind their houses with a second type of alley building: car garages. While some repurposed the stables in their alleys, others built new structures to store their new automobiles. These garages were typically modest, utilitarian affairs. Most were one-story buildings with a large garage door opening at the front, perhaps a window on a side wall, a flat roof, and little-to-no ornamentation. These garages were built as freestanding and attached structures, independently and together. Some of the larger garages were built to house commercial enterprises. These businesses were built with fireproof materials, such as concrete and brick, so they could safely store the gasoline needed to fuel the cars that they would also maintain and repair.

While stables and garages were most popular, Bello’s third typology of alley building includes commercial warehouses, workshops, and other buildings used for storage. Her fourth typology includes studios, sheds, and other small buildings that were functional, unadorned, and had limited openings.

Bello explained that she could not really categorize Washington’s alley dwellings as “adaptive reuse” since they were designed to serve as homes, which they did until so many were later destroyed as we’ll see below. However, these homes constituted an important part of the Capitol Hill alley community and need to be preserved.

Unfortunately, only 108 remain across the city, which is a tremendous loss since a city-wide inventory counted 3,337 inhabited alley dwellings in 1912. You can see two fine clusters of the 18 alley dwellings that remain on Capitol Hill on F Street Terrace and Gessford Court.

Bello explained that the white property owners who built these cheaply-constructed alley dwellings rented them out to unskilled workers and members of the working class at a great profit.  By 1871, 81% of their tenants were African Americans who worked across the Washington community.

According to the 2014 DC Historic Alley Buildings Survey, the first alley dwellings were of frame construction with no indoor plumbing or heat. The residents shared water pumps and outhouses, and the lack of a sewerage system contributed to unhealthful and insanitary conditions which later attracted the attention of housing and social reformers.

In 1871, the city’s first Board of Health condemned the alley dwellings as unfit for human habitation. They reported that many alleys were “lined on both sides with miserable dilapidated shanties, patched and filthy.” The city condemned and demolished more than 300 alley dwellings and recommended hundreds more for rehabilitation.

During the past several decades, changes in the real estate market, public perception, and zoning have collided to create new spaces within old buildings. During her presentation, Bello shared her notes, photos, and observations from her many walking tours of Capitol Hill alleys.

Careful preservation includes retaining the salient features that define the character of buildings so we can “see a connection with its predecessor.” For example, by retaining the stable stall windows, we can see that this building was once a stable that housed horses. She hopes architects also maintain the historic hayloft “window,” the vehicular entrance on the bottom, and accommodate the living space on the second floor.

In addition to preservation, Bello hopes that homeowners and future developers realize the environmental issues that are “too great to ignore.” She said that “we should repurpose old buildings and reuse materials to the greatest extent possible because this planet cannot afford not to.” She asked, “why tear down a building when you can purpose it?”

Bello ended her presentation by quoting the title of an article by Robert Adam, a fellow architectural historian, “The Greenest Building is the One That Already Exists” (Architect’s Journal, 2019).

Justine Bello has worked as a conservator in both the private and public sectors since 2007.  She is a Professional Associate of the American Institute for Conservation and lives in Kingman Park. 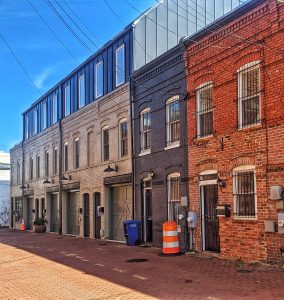 The WebEx link posted below will be activated shortly before the meeting.

A call-in number is not available with the current version of WebEx, for which we apologize. We plan to record and post the presentation for those who are not able to attend, live. 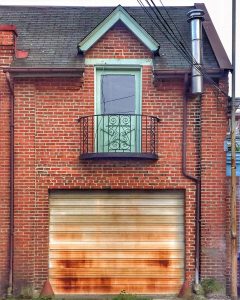 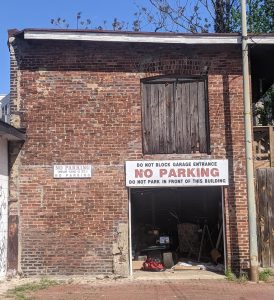