Washingtonians will not be surprised to learn that indecision, bureaucratic inaction, and a failure to agree on the vision and purpose for the U.S. Botanic Gardens would help preserve it in its current glory. 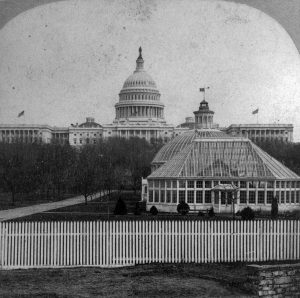 On March 24, Mathew Gilmore, a Washington historian and scholar, gave CHRS members a detailed look at how competing political and other forces created today’s conservatory.

In 1818 Congress passed the Act that would give the Columbia Institute a five-acre tract of land to create a botanical garden at the east end of the National Mall.

By the 1850s, the U.S. Patent Office saw this space that the institute had left unused as the perfect place to house the botanical artifacts that the U.S. Exploring Expedition of 1838-42 had gathered during its voyages in the Pacific Ocean. The Patent Office needed the space to expand its buildings, and the plants and flowers in its greenhouses from this global trek were overflowing.

In 1856 the U.S. Botanic Garden was established, under the jurisdiction of the Congressional Joint Committee on the Library. A 300-foot-wide grand conservatory was built to rival London’s expansive Kew Gardens, and the magnificent Bartholdi Fountain with its enormous 93-foot-diameter base. Over the years saw the creation of an extensive collection of memorial trees.
Tropical plants filled the center of the grand botanical conservatory, with hardy, northern plants on the east side of the greenhouse, and those from the southern hemisphere on the west side. Ten separate, smaller, parallel greenhouses were constructed to the south of the main conservatory.

By the 1880’s, Gilmore said that all of the botanical artifacts from the Exploring Expedition had perished except for a single Chinese Jujube tree which lived until 1911 when it was blown down during a storm. Living descendents of the botanical specimens exist at botanical gardens across the United States.

The garden had become a splendid recreational space for visitors and lawmakers alike and was called the “bouquet garden” of Congress. During each session as many as 2,000 bouquets were sent to the wives and “fair friends” of the congressmen. At the end of the session each congressman was also entitled to “take home one large box of choice plants, shipped free.”
What a smart way to preserve your funding and existence in congressional Washington!

In the 1900’s several plans threatened to move the Botanic Garden to other areas of the Mall. Most of us are familiar with the Senate Park Commission (or McMillan) Plan of 1902 which would transform the Mall into a single, unified composition. All of the individual segments east of the Washington Monument would be brought into harmony, to unify the agriculture, Smithsonian, Armory, and Botanic Gardens grounds.

The commission proposed creating a ”great systematic collection of living plants,” whose primary purpose was not recreational, under the direction of the Department of Agriculture. The plan also wanted to place a “large working museum” with a “pleasing landscape character” in Potomac Park.
These three characteristics hardly described the existing Botanic Garden: it did not house a research collection, was in fact recreational, and was located in a confined space at the base of the Capitol. Again, the planners envisioned a greenhouse facility that would rival Kew Gardens, the sprawling, 330-acre botanical research conservatory located outside London.

During his presentation, Gilmore went into greater detail on how best intentions, stubborn bureaucracy, limited funding, political feuding, and memorial trees all stood in the way of the Senate Park Commission’s goal; but compromise was reached and the Botanic Garden moved only slightly south, bringing it in line with the Mall plan, and led to its present form. The most resistant opponent was the Botanic Gardens itself, led by William R. Smith (1853–1912) and George Hess (1912–1934).

At the end of his presentation, Gilmore noted that in 1993, the Botanic Gardens completed its Production Facility which features nearly two acres of greenhouses divided into 34 bays and 17 environmental zones located in southeast Washington. While not open to the public, its annual open house is highly recommended. You can find this year’s COVID-unfriendly, virtual tour at https://www.usbg.gov/production-facility-virtual-open-house.

Matthew Gilmore is an independent scholar who specializes in the history of Washington, DC and the metro area. He has published several books and articles on a wide variety of topics related to DC history. He is the editor of the H-DC discussion list and blogs on Washington history and related subjects at matthew gilmore.wordpress. com. He served as reference librarian at the Washingtoniana Division of the DC Public Library for many years.

A recording of this presentation is available on the CHRS website at chrs.org/botanic-gardens-pc/.

The presentation was followed by a membership meeting at which CHRS President Beth Purcell presented a report from the House Tour Committee announcing that the 64th annual Mother’s Day event will be a series of outdoor, guided walking tours, the “Tour of Tours” and a reminder from the Elections Committee that nominations for board positions would be open until March 26.

Throughout the first quarter of the 20th century a titanic struggle took place at the foot of the U.S. Capitol—Washington’s planners versus the Botanic Garden. The Senate Park Commission (or McMillan) Plan of 1902 was a design to utterly transform the Mall into a single, unified composition. All the individual segments from the Washington Monument eastward would be brought into harmony, unifying the agriculture, Smithsonian, Armory,  and Botanic Gardens grounds.

Best intentions, stubborn bureaucracy, limited funding, political feuding, and memorial trees all stood in the way of that goal. The most resistant was the Botanic Gardens, led by William R. Smith. The area adjacent was getting crowded. The Grant Memorial was placed to head the Mall, elbowing into the gardens. The Meade memorial took its place at Pennsylvania and 3rd NW—looking in vain to a companion memorial where the gardens still sat. It was not until 1927 that the gardens gave way, moving just a block south (the Batholdi fountain moved too). Transformations continued until the 1970s, giving us the landscape of today. 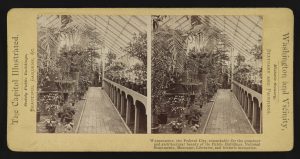 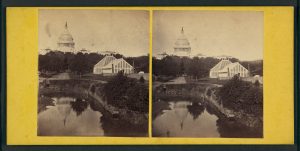 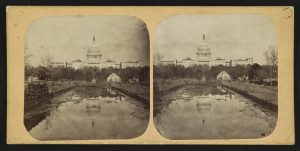