Uncovering the History of the District’s Buried Streams, a virtual Preservation Cafe, was recorded Tuesday, February 15, 2022. 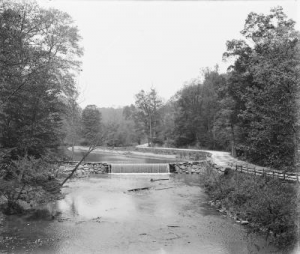 Like many modern cities, Washington, D.C. was once home to a vast network of streams, tributaries, and swimming holes which boasted evocative names like “the Piggory” and “the Blue Cork.” Our capital was a city of streams, built at the confluence of the Potomac and Anacostia rivers.

Examples include Tiber Creek which was the District’s second-largest stream, after Rock Creek. It originated from springs, seeps, and small tributaries near Park View and the Old Soldier’s Home and was originally called Goose Creek for its abundant waterfowl. Piney Branch was once a “vigorous” stream before it disappeared under the pavement. 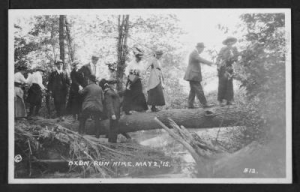 In summer 2021, the DC Department of Energy and Environment released an interactive steam mapping project which examines the disappearance of these historic streams, as city planners have drained, relocated, and forced these intricate waterways into drainage and sewer pipes, to build the city we know today.

The three presenters  described the central role they have all played in this timely project. They also presented the legacy of our historic streams, and described the discussions and proposals city planners are entertaining to “daylight” or bring these prominent streams back to the surface.

The meeting was recorded and is available on youtube.