Arming a Navy: The Naval Gun Factory and Its Local Workforce, a virtual Preservation Cafe, was presented by Edward Valentin, a Historian and Curator of the National Museum of the United States Navy, Tuesday, March 15, 2022, 6:30 pm. The talk was recorded. 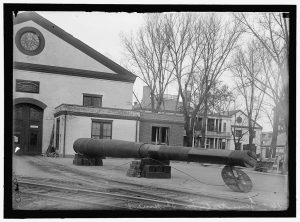 The Washington Navy Yard, the Navy’s oldest shore establishment, has supported U.S. naval operations since 1799. The establishment of the U.S. Naval Gun Factory at the Washington Navy Yard in 1886 dramatically shifted the base’s mission from ship repair to ordnance production, but the Yard continued to rely heavily on nearby D.C. neighborhoods like the Capitol Hill District, Barney Circle, Anacostia, and Fairlawn to supply its workforce. From 1886 until its closure in 1961, the Naval Gun Factory was one of the largest employers in Washington D.C., employing thousands of people from a diverse array of backgrounds, including European immigrants, women, and Black Americans. The Washington Navy Yard owes much of its 200-plus years of success to the contributions of D.C. neighborhoods. 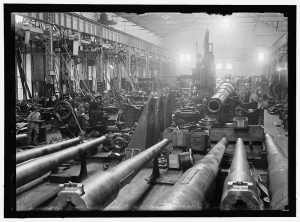 A recap of the presentation:

On March 15, Dr. Edward Valentin, historian and curator at the National Museum of the United States Navy, met virtually with CHRS members to describe one of the museum’s newest temporary exhibits, “Arming a New Navy: The Naval Gun Factory and Its Local Workforce.” The exhibit presents the history of Building 76, the home of the National Museum of the United States Navy, with a broader social history of the people who lived in the neighborhood and worked at the Navy Yard.
The Washington Navy Yard has supported U.S. naval operations since 1799. Valentin explained that the navy was relatively small from 1775 to the 1870s. With the exception of the Civil War, its main role was to defend the U.S. coasts and protect commerce.
During the 1880s a special board of naval officers convinced Congress to fund the construction of new cruisers, made of steel with electric lighting and breech loading guns. By the 1890s the mission of the U.S. Navy had expanded to “controlling the seas” in support of the imperialistic ambitions of the United States. The naval leaders “embraced strategies, operations, and doctrines that would promote offensive actions and decisive engagements” among the world’s large fleets and battleships.
In 1883 Congress established a special board to find ways to expand the navy with more battleships and more fire power. In 1886, Congress accepted the board’s recommendations to create a government-run naval gun factory at Washington’s Navy Yard. It took about six years before the factory was in full operation.
The Naval Gun Factory would feature a series of interconnected shops that each had their own unique tools and functions, which were housed in different buildings. An internal railway system was built to transport the materials, equipment, and manufactured guns from one part of the yard to another.
From 1886 until it closed in 1961, the Naval Gun Factory was one of the largest employers in Washington D.C. It relied heavily on nearby D.C. neighborhoods, including Capitol Hill, Barney Circle, Anacostia, and Fairlawn, to supply its workforce of thousands of people from a diverse array of backgrounds, including European immigrants, women, and Black Americans.
Valentin showed several group photos of employees who had worked at the Navy Yard during the World War I era. This included group portraits of the construction and repair department and the planning and estimating force. The women in the photos worked as clerks. A newspaper clipping showed the results from the area bowling league with teams from several different work departments. Another clip explained that the CLOFFEPS baseball team was an acronym for six different machine shops: cartridge case, laboratory of foundry, forge, electric, pattern, and steam.
Working at the Naval Gun Factory involved long hours and dangerous working conditions. Most employees walked or took the streetcar to work, entering the factory through the Latrobe Gate. According to the 1910 census data, the Navy employed 25% of the residents in Barney Circle.
Most Black workers were relegated to performing menial labor at the Navy Yard. In April 1921, the Baltimore Afro American ran the headline,“Navy Yard Branded the ‘Worst Discriminator’” because it did not hire any of the Black graduates of the company’s apprenticeship program despite its expressed need for skilled workers, but it hired 399 of its 437 White graduates. This changed when Black activists pressured President Roosevelt to end this discrimination in the defense industry During World War II. Valentin said that 300 of the 1,200 women hired from the D.C. area were Black.
Valentin explained that the Navy Yard had as many as 20,000 employees during World War II. However, this workforce was gradually reduced during the 1950’s when the country reduced its troop numbers and conventional weapons and began to focus on a new nuclear arsenal. The Navy eventually closed the doors of the Naval Gun factory in 1961.
Valentin encouraged participants to visit the National Museum of the United States Navy, which is welcoming visitors once again Monday-Saturday.

The talk was preceded by a Membership Meeting.