Capitol Hill homeowner, Peter May presented “Not so Permastone: A History of a House in its Facade”at a free, virtual Preservation Cafe, Tuesday, May 17, 2022.  Recording of event.

The house at 1017 C Street was built during the 1870s and has undergone many changes during its nearly 150-year existence. Nearly all of its interior has been altered or replaced, and the front and rear yards have lived many lives. While it was built as a modest home, it has also housed two different businesses over the years (both for several decades), and likely served as a boarding house.

When Peter and his wife, Tina, bought the home in 2001 it was a functioning beauty parlor with what seemed to be two dwelling units. They have spent 20 years renovating, but almost all the work has been on the inside. 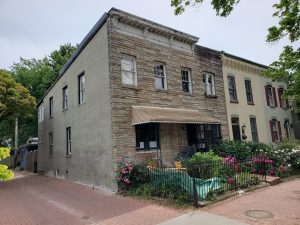 In 2021 the time had come to tackle the front façade which had been clad in Permastone since 1956. Permastone is a concrete resurfacing product that tries to mimic ashlar stone, but does not really succeed. They planned to remove the Permastone, do some necessary repairs and repointing, and build a new porch to replace the aluminum awning. That is sort of how it is working out, but they have also received a visual history lesson on this historic house during the process. 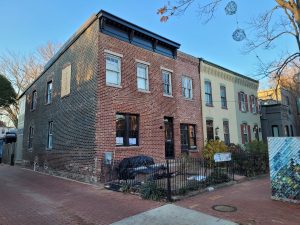 Below is a photo-essay as posted in the front yard. This home is included in “What I Love About My House” a collection of videos associated with the 2020 Stay at Home (virtual) House Tour.  The owner gives a narrated tour  of the kitchen, a space formerly occupied by the beauty shop and addresses the Permastone facade.