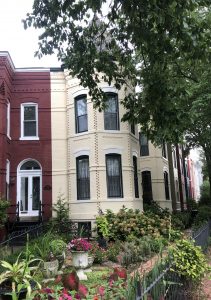 ★ Phil built all of the upper glass-front kitchen cabinets and the butler pantry.
★ The speaking tube, a Victorian communication device still in use today (on the wall near the refrigerator) connects to the second-floor hall.
★ Phil’s grandfather collected clocks, including the 1905 Norwich Linen model manufactured by the New Haven Clock Company in the guestroom.
★ Phil and Cathi were married in Florence, Italy in 1989. Bright red banners advertising a charity dinner hung from light poles all around the city. After the event, a worker cutting them down happily gave one to them. The plate and glass under the banner were used at the charity dinner served on the streets of Florence.

Fun to Find:
★ A 1926 photo of Cathi’s father and his twin brother on a toy cow (first shelf of book case). A later photo shows the boys riding a pony.
★ The 80-plus-year-old Teddy Bear belonged to Phil’s older brother, who died of pneumonia while still an infant. The bear became Phil’s when he was born.
★ The roosters and Russian dolls on the kitchen shelves and an apology from Frankie on the fridge.
★ The reflection of the camera that records the tour
★ Find the speaking tubes, upstairs and in the kitchen! Helllloooo? 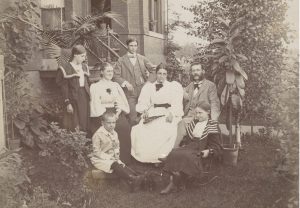 These walls did talk. Fifteen years ago, the owners of this corner house overlooking Lincoln Park noticed three people looking intently at the outside of their residence. One of the visitors, Jean Colison, explained that her mother was the granddaughter of the original owner. She had come to see the house, along with her mother Lois Colison and her brother Warren.

“You must be the Frankes,” Phil exclaimed. “I have your mail!” Mrs. Colison was indeed the granddaughter of Friedrick Maximillian Franke (1844-1900) and his wife Lisette Maria Kandler (1852-1925), who had purchased the house in 1892. Her mother, Hilda, was one of the Franke’s five children. 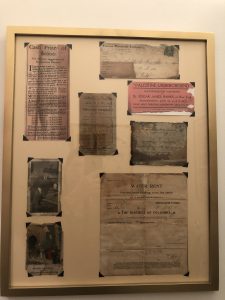 Treasures Found In the Walls

While renovating the house, the Smiths discovered mail addressed to all seven members of the Franke family in the door and window casings, where it apparently had been placed to stop drafts. Also found were documents such as the paid receipt for “Water Rent” of $3.75 for the year 1903 and Albert Franke’s library card. A few examples are framed in the powder room.

Frank Wickline built the Queen Anne-style row house in 1892. The Permit to Build from the District of Columbia Inspector of Buildings and the Special Application for Projections beyond the Building Line by the Department of War were approved on December 1, 1891. The house and the adjoining residence on North Carolina Avenue were constructed together and were valued at $4000. 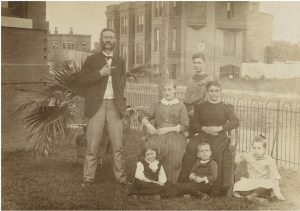 The Franke Family in an earlier photo

The Frankes financed the house with a loan from the German-American Building Association, the name of which is still engraved on the building at the northeast corner of 3rd Street and Independence Avenue.

The Colisons provided documents and photos including a June 27, 1896 family portrait in front of the house that now hangs in the vestibule along with an earlier, undated photo showing only four houses on the street. There is also a 1904 photo of Mrs. Franke (a milliner) and a friend in their elegant hats taken from the corner.

Max Franke, an engraver born in Germany, was the first owner. He migrated to Michigan at the age of 25 and moved to Washington, DC in the early 1880s. Two of his engravings of The Capitol at Washington are in the Library of Congress. A downloaded copy of one is framed in the vestibule. 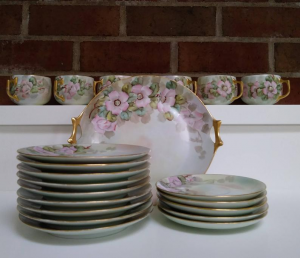 In 1909, the house was sold to Lulu Fluckey (1872-1934), an artist whose beautiful hand-painted fine china is still collected today. Known professionally as L.S. Fluckey, she was an artist for Limoges and other premier porcelain makers of the day. Her son, Rear Admiral Eugene B. (Lucky) Fluckey, was awarded the Medal of Honor for his valor in WW II. The house was then owned by her daughter Frances Lucille Fluckey Clarke, who sold it in 1938. Afterwards, there was a series of owners ending with Philip and Catherine Smith, who purchased 102 13th Street (once 2 13th Street), NE, in 1990. The house originally had four bedrooms and one and one-half baths. It was remodeled and updated in the early 1990s. The basic floor plan was retained except for the bathrooms. One bedroom was converted into two bathrooms. The half-bath, which was in the kitchen, was removed to enlarge the kitchen. The back hall to the kitchen was closed and part of the hall became a powder room.

To the left of the center hall is the living room with an octagonal bay, curved corners, and a view of Lincoln Park. To the right is the dining room. The china cabinet in the recess had to be completely rebuilt.

The pocket doors to both rooms were found in the basement. One door of each set had approximately one-third of the top panel cut out, where a window had been inserted. Why? No one knows. The two solid doors were reinstalled to the living room and the two others, with replacement glass, in the dining room.

The swinging door to the kitchen was also found in the basement. It was not the original door so the Smiths enlarged it with molding to fit. They also built the glass-fronted kitchen cabinets. A door opens off the kitchen to the patio. 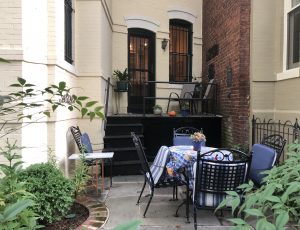 Above the kitchen is the third bedroom with a curved wall and odd angles. The room is filled with light from its three windows and skylight. The oak dresser was inherited from Phil’s grandparents. The steamer trunk belonged to Cathi’s grandfather who lived with her family. He always filled it with Fifth Avenue and Mounds candy bars. The children could have as many as they wished when their parents weren’t looking. The right wall of the second floor hall has the end of a “Speaking Tube,” a Victorian means of communicating between floors, still used by the Smiths today.

The Smiths have now lived on Capitol Hill for over 30 years. They love living in our beautiful neighborhood and plan to age in place here.