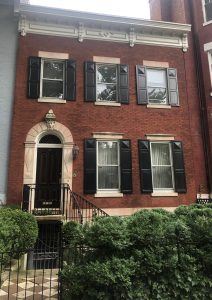 ★ Spectacular rug collection, several from Weschlers Auctioneers and Appraisers
★ Skylights in upstairs hallway and bathroom
★ The main front and rear bedrooms have their original “chimney closets”, an extravagance when the house was built since closets were taxed as separate rooms.
★ Bedspread in the master bedroom belonged to the owner’s maternal grandmother.

Built during the Civil War, this home is one of the earliest brick houses on the square. At that time, the house would have been surrounded by fields, pasture, and a scattering of frame houses. Richard Rothwell, a prominent builder and marble cutter/stonemason, designed his family’s home to reflect not only his profession and the materials he knew so well but also the Civil War period before the more exuberant Victorian architecture became fashionable on the Hill. Rothwell and other family members worked on a number of prominent Washington buildings such as the Patent Building, Pension Building, Capitol Extension (north and south wings), Treasury Building’s west wing, and cenotaphs and private memorials at nearby Congressional Cemetery before turning their attention to the burgeoning residential development on Capitol Hill of the 1870s.

Façade: If you are ever walking by this house, stop a moment and consider some of its unusual features such as the 22-foot-width instead of the standard 18 feet. The eye-catching checkerboard marble and red-and-grey slate pavers connecting the sidewalk and the stoop are original to the house. The marble front door surround with its unusual paneling is completed by the arch with the Green Man keystone (believed to have come from England). Marble — not a typical Capitol Hill residential material — is also seen on the graceful, curving steps, the entrance to the English basement, and the stone foundation cladding. One last reminder of life in the 19th century is the coal cellar under the northern half of the front garden, detected by the coal grate that would have been lifted and then anthracite coal shoveled in. 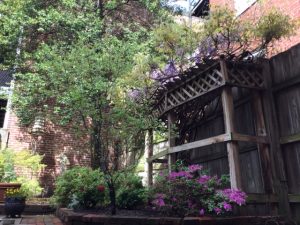 English basement: When built, the English basement was the main family area of the home since this is where the kitchen and dining area were located. In the 1989/90 renovation of the English basement, the present owner preserved the kitchen (while updating the appliances), making a conscious choice not to move the dining room to the main floor as has been done in most Capitol Hill renovations. The front half of the downstairs has been turned into a formal dining room with a late 19th-century French mantel. An 18th-century American Federal convex mirror hangs just inside the door. The center window was extended downward to create a floor-to-ceiling opening to match the flanking all-glass doors. Old French doors were installed between the dining room and the rear kitchen area, and there is also a concealed door to the basement bathroom.

In the kitchen area, a rear fireplace was reopened and an 1880s walnut mantel installed.

The furnace was updated and moved to the side with the hot water heater and washer/dryer, forming a small utility and tool area adjacent to a new bathroom. In front of the fireplace is a mid-18th-century drop-leaf, gate-leg table, set on a diagonal to the room

First Floor: The entrance hallway is exceptionally wide and long with  pocket doors to the double parlors. The window frames in the front of the house are unusual in that they are all angled out to provide maximum light. The floors in the parlors and throughout the first and second floors are original, variegated-width, heart- of-pine plank floors.

The front parlor marble mantel-piece is original to the house and probably imported from England. The ceiling rosettes and mouldings were added in 1983. Gaslight chandeliers and sconces in the 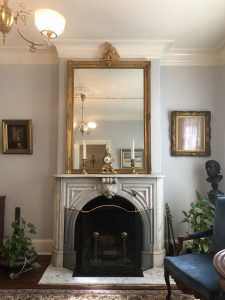 hallways, stairwells, and parlors are period from Boston and true to the house based on the gas pipe mains remaining in the attic and buried in plaster throughout the house. The front parlor chandelier from 1865 includes rare etched-glass shades. The Chippendale-style mahogany arm chairs date to the late 19th century and those upholstered in blue are fruitwood, circa 1900.

A late 18th- or early 19th-century George lll tall case clock highlights the second parlor. The doorway to the rear bathroom was probably a window before the rear section of the house was added in the late 1880s and, in fact, is the same width as the rear parlor windows. The bathroom contains an 1870s marble-top chest, adapted as a vanity, and mirror plus period wall sconces.

Second Floor: The staircase leading to the second-floor bedrooms is an interesting configuration that doubles back on itself from a midpoint landing. The house originally had no plumbing upstairs; a large window similar to the other upstairs rear windows graced the landing where the door to the upstairs bathroom is now located. The upstairs bathroom was added in 1985 and contains another 1870s marble-top chest, adapted as a vanity, and a mirror flanked by period wall sconces.

The age of the house is immediately apparent from the sag in the second-story floor and the accompanying droop in the door frame to the small front bedroom. This bedroom, currently a study, was undoubtedly used for infants and very young children since another doorway (also slightly drooping!) connects the room to the main front bedroom. The bedspread in the master bedroom belonged to Sandy’s maternal grandmother who crocheted lovely things. This could have been made by her or by one of her friends; they were all Italian immigrants who came here in the early 1900s. The door connecting the two front bedrooms contains the original, restored lock hardware. Just outside, in the hallway, is a jackwood-and-ebony Chettiar merchant trunk from Tamil Nadu, India.

The main front and rear bedrooms have their original chimney closets, which would have been an extravagance when the house was built since closets were taxed as separate rooms. All the other

closets that exist in the house today have been added in recent times.

24 Ninth Street remained in the hands of the Rothwell family from 1862/63 until the estate of Sarah Rothwell, wife of William Rothwell (Richard’s eldest son), was settled in 1938. In March 1938 ownership passed from the heirs of Sarah Rothwell to Laura and Lydia Bowman. In November 1956 Laura Bowman sold the house to Adeline Gier Smith. In November 1982 Smith sold the house to Timothy P. Hauser, the present owner.

An in-depth history of the house and the Rothwell family can be found here.