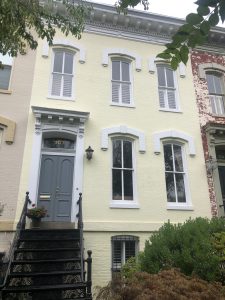 ★ Many of the rugs were purchased from Muzaffer Biber, whose family has run a carpet business for generations at the Grand Bazaar in Istanbul. The rug in the piano room is a reproduction of the famous Pazyryk rug from the fifth century BCE. The two rugs in the downstairs hallway and the rug on the upstairs landing are originals of Anatolian design and were also purchased from Mr. Biber.
★ Richard Callner gouache on handmade paper over dining room mantle.
★ Plaster work in living and dining rooms

Fun to Find:
★ Black cats above the lintels
★ Globe
★ Page from 2017 House & Garden Tour catalog – when this house was open to our guests

707 East Capitol Street was built in 1876–1877 by developers Samuel and Thomas M. Carpenter who subdivided two lots into five to build a row of identical two-story, three-bay brick houses with raised English basements. Although they could have elected to build habitable projections into the public space as allowed by the recently enacted Projection Act, they chose to build flat-front houses and emphasize the fashionable Italianate style with cast-iron front steps, decorative double doors with raised bolection molding, segmental-arched windows with brick-hooded crowns, and wide overhanging eaves with bracketed cornices.

Bob and Connie Faltynek always knew they wanted to retire to Washington, DC. To friends who ask why, they reply, “Why would anyone want to live anywhere else?” They rented briefly upon arriving, but after they went to a concert at Hill Center, they fell in love with Capitol Hill and bought this house in 2015.

The Faltyneks, both scientists who moved here from the Chicago area, weren’t looking for a major project. This house had kitchen and master bathroom renovations in 2005 and required only some fresh paint to help showcase an impressive art collection.

The house has a long history of renters. At one point, the house was broken into separate apartments
and still runs on three electric meters. A newspaper advertisement from The Evening Star on July 9, 1877 lists 707 East Capitol Street for rent with 10 rooms with all modern improvements for $40. It was for rent again in the summer of 1886 with “newly papered and painted brick, 8 rooms, bath, cellar, range, etc. $35 a month.” In 1894, individual rooms were available for rent. In 1927, the advertisement touts electricity and steam; in 1930 “warm bedrooms…plenty of hot water;” in 1936—“unlimited phone.” 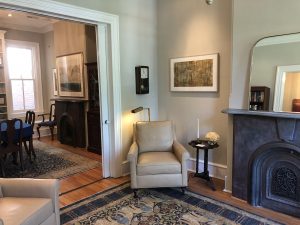 In the living room, the fireplace has a stone mantel and a heating grate. The owners believe the house had central heating with a furnace from the beginning. The artwork to the right of the fireplace is by Audra Weaser. This rug, made in Afghanistan, exhibits a Chobi Persian design. Notice the cove molding and plaster work around the ceiling light fixtures in both living room and dining room.

Take a look at the pocket doors as you pass into the dining room. The dining room has a dog-leg window to the right balanced by the mirror on the left and window seat storage boxes. The artwork above the fireplace is a Mediterranean landscape by Richard Callner, an original gouache on handmade 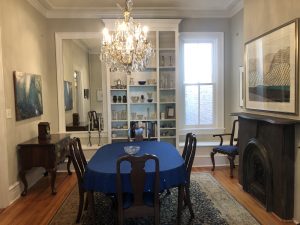 paper. This carpet, made in Pakistan, exhibits a classic Persian Sarouk design.

The 2005 kitchen remodel with a marble island is inviting and spacious with table and chairs for informal and convenient dining. The rear addition was added at the same time; the previous owners took pains to match the flooring and the door moldings. The rug near the piano is a reproduction of the famous Pazyryk rug believed to date from the fifth century BCE.

The back porch opens onto a courtyard with slate patio and alley beyond. The hallway features a nightscape by Shivani Dugar. 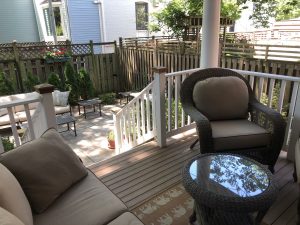 Upstairs, notice the bright orange painting by Julio Granda. Look for the functional transom windows above the doors and the knobs left over from the gas installation. The guest room features traditional red Dala horses emblematic of Connie’s Swedish roots. Also, this landscape is one of three Agnes Rathonyi paintings in the house. The huge master bedroom features three windows overlooking East Capitol Street, which is much quieter than you might think. The rug in this room is an authentic Persian Bidjar made in Iran.

At the back of the house, you can tell where the rear addition starts by looking at the change in floorboards.  This room is light and airy, with delightful views of the vegetation in the interior of the block. It is used as a home office and has copious closet space.

The basement, which is not on the tour, has a full kitchen and laundry room.