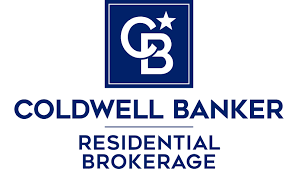 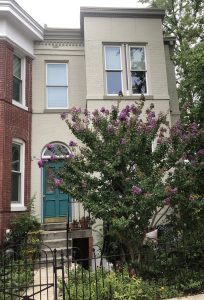 Fun to Find:
★ Dog paintings on the ceiling (by Kessler from Eastern Market)
★ His & his Kewpie Doll photo
★ Mark’s handmade quilt in the master bedroom
★ Portrait of Bert who favors his Grandfather Kubli, “whose shnozola rivaled Jimmy Durante’s” 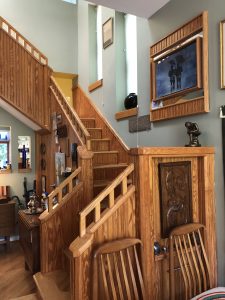 According to permit information, Brook Cason developed this row of nine houses in 1896; each was 15 by 36 feet with an estimated cost of $2,200. John W. Davison, a 36-year-old clerk at Treasury and his wife Marion lived here in 1898. Two years later they had been joined by a daughter and a boarder, John Hall, 23, who worked as a clerk for the Navy. A series of renters and owners followed.

Bert Kubli bought the home in 1998 from a family who had owned it for fifty years. It was in rough shape with only one habitable room, a total of seven electrical outlets (and a lot of extension cords) and a bucket under a hole in the ceiling of the tiny rear bedroom. His original plan to restore the house had to be abandoned when he realized that the structure was falling apart. Instead, he completely reimagined the space, turning it into a showpiece of ingenuity and creativity. Bert has done nearly all of the construction himself, a labor of love reflected in his craftsmanship in every single room.

The house originally had a central staircase that cut across the middle of the house, separating it in two halves. Bert relocated the stairs to open up the dining

area and make a focal point of the staircase with its beautiful woodwork. The wood used in the stairs is carried into the window sills along the stairs and floors of the dining area, kitchen and rear living area – each laid in a slightly different pattern. The horizontal elements, including the floors, are oak; the vertical pieces (beadboard) are fir. The skylight over the staircase was added in March of 1998, one of the very first improvements to the house.

What is now the kitchen was originally used as the dining area. Bert created a custom look within his budget by using IKEA cabinets and incorporating them into his own millwork including a cabinet-behind-a-cabinet over the refrigerator. The living area at the rear of the house was originally the kitchen. A full but tiny bathroom is not on the scan but we do have a video.

The couple pride themselves on their bargain-hunting prowess and are big fans of mid-century American decorative arts. Most of the furnishings, including Knoll and Bertoia pieces, were purchased “for ten cents on the dollar” at flea markets and yard sales – or picked up off the street.

As originally built, there were three bedrooms and an old-fashioned bathroom with a claw-foot tub on the second floor. What is now the master bedroom had been divided into two very small rooms by a wall to the side of the existing skylight. Bert removed the wall but kept the skylight in order to access the 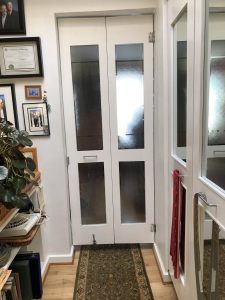 roof, which boasts 18 solar panels. The bedspread is Mark’s quilting creation. The desert scene to the right of the porch door was painted by Bert’s mother.

Several others were painted by Mark’s mother. Portraits of the couple hanging over the bed were drawn by artists on the Nevsky Prospect in Saint Petersburg, Russia. Mark taught there every other year from the 1990s until his retirement from Towson University.

The master bath now features two freestanding lavatories, each angled in front of a window and an open shower with glass bricks. The ceramic and stone tile work creates patterns and fit together like a jigsaw puzzle. In the hallway there are twenty-six feet of mirrored closet space. Note that there appear to be no doors to either the bathroom or bedroom. As Mark and Bert rarely entertain, they didn’t think it necessary – but a closet door attaches to a roll-out door by the click of a magnet, when privacy is desired.

The front room is used for Mark’s quilting projects and guest accommodations, library and office. The focal point of the room is a millwork enclosure opposite the front windows – it opens into a

Bert also built—again, with his own hands, as a one-man job—the two-story Victorian-styled porch that faces west. The upper porch, accessed from the master 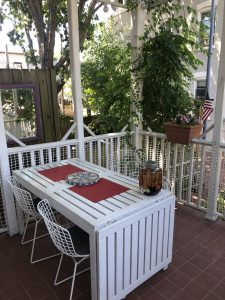 Sun Tea on the Catio

bedroom, is screened and serves as a “catio” for two well-loved and pampered Maine Coon cat sisters, Lera and Luysa. A hatch in the floor releases a fire-escape ladder to the first floor.

The basement rental unit and studio space are not included in the tour, but we have videos of the rental and Bert’s workshop. It’s worth a site-visit to meet the couple’s yard ornaments, great favorites with the neighborhood kids. Two of the critters appear in the Whimsy of Capitol Hill photo scavenger hunt.

Co-owners Bert, 82, and Mark McElreath, 76, have been a couple for more than 19 years; they were married in DC in 2010. Both are retired: Mark from the faculty of Towson University; Bert from the National Endowment for the Arts.