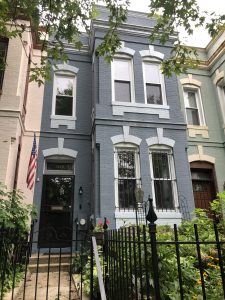 ★ Extensive art collection, many of the watercolors by Mike – note the His & Hers portraits of Ann and Mike on the staircase and the Library of Congress interior at the top of the stairs
★ Art glass collection in living room
★ Sumi-e painting (looks almost like a photo) over living room sofa 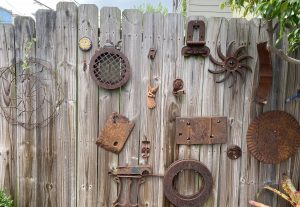 Capitol Hill’s post-Civil War construction boom hit this square in 1892. Architect Vincent A. Hubbard designed the eight houses in this row in the popular Queen Anne style, with a variety of brick embellishments typical of the period. For much of its history, beginning in 1912, the house was rented, sometimes as an informal boarding house when the front room was offered for rent/furnished as was common on Capitol Hill, particularly in times of war and Depression. In 1932, toddler Ethel Smith won a contest for the most popular baby, and received a radio set. In 1951, Mrs. Cora Lee Young bought the house and her mother, Amanda Douglass, died here at age 90 in 1954. Mrs. Geneva Jackson, believed to have worked as a laundress, died in the house in 1971.

Ann and Mike bought it in December 2005, after it had been completely renovated. They reconfigured the kitchen and added sliding doors onto the patio, which they refurbished with a brick floor and their collection of rusted metal objects. The couple “love sitting out there and listening to the birds.“ Look throughout the home for evidence of their passion for art and travel. Many of the paintings are Mike’s watercolors. In 1992, around the time Mike and Ann married, he mentioned that 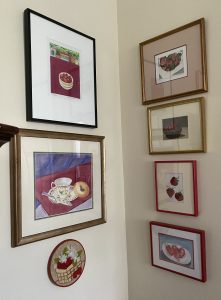 he had always wanted to try to paint with watercolors. Mike had not attempted much artwork up to that time. Ann said “go for it” and the rest is history. He took lessons for years at the Torpedo Factory and, since his retirement in 2006, he has joined the West River Artists in Galesville, MD to paint once a week. Several other watercolors were done by their late friend Pamela Bounds Peia, a Capitol Hill resident.

The living room china cabinet houses a collection of art glass pieces. The first piece in their collection was a wedding gift by a local glass artist, Rick Sherbert of Glen Echo (top shelf, left side). Some other pieces were picked up on their many domestic excursions and most are by modern artists such as Randy Walker, a Pilchuk Glass Studio artist (top, right hand), Jared Davis (top, left hand), and Baker O’Brien (bottom center shelf). The Graces have also bought some older Steuben pieces, two of which are their handkerchief shapes (bottom shelf, center section and top shelf, center section). The rug was purchased during a trip to India. Particularly impressive are the two exquisite Sumi-e (pronounced sue-mee-ay, a Japanese ink technique) done by Fred Harris, an ex-pat and friend of Ann’s parents, while they lived in Japan in the early 1980s. Harris was well regarded in Japan for his mastery of this traditional technique. One of the Sumi-e 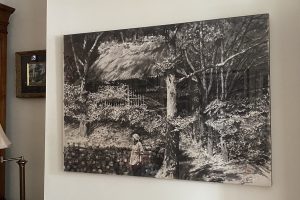 hangs over the sofa. The other is on the opposite wall, next to one of Mike’s tulip paintings. In addition to the Sumi-e, the Graces have a quick sketch by Harris of a Hong Kong scene hung on the wall to the right of the breakfront in the living room. He also painted in watercolors and the Graces have two of those as well. The Oxaca-ware on the cabinet in the front bay was collected by Ann’s mother while she lived in Mexico.

As you climb the stairs, note Mike’s watercolors on the left, especially his self-portrait and the portrait of Ann, as well as the Library of Congress interior at the top. The guest room at the top of the stairs is sunny and airy and has one of Mike’s landscapes over the bed. The rug is another treasure brought back from India. On the dresser is a Baltimore and Ohio Railroad clock given to Ann and Mike by Sandie Lotterman when she moved away from Capitol Hill. The clock is going to the home of a railroad-loving friend in Iowa.

The next room, open to the hallway, serves as an office. A black-and-white photograph of a seascape, displayed on the shelves, was taken by George Porter who had a very sophisticated dark room 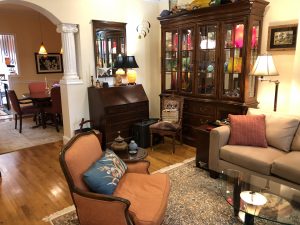 in the basement of his house on 11th Street NE. It was a gift from the artist and his wife, Lois. Note the star on the desk from Capitol Hill Village, where the Graces are long-time volunteers. Look over the stairs to see the huipil, a woven and embroidered textile the Graces bought in Guatemala. Each indigenous community has their own design; this one is worn by women over their blouses.

The bedroom at the front of the house features Mike’s collection of model cars and Lego structures (Ann reports that Mike is a “car nut” and loves puzzles) as well as a collection of strawberry paintings and prints (Ann is a self-confessed “strawberry nut”). The lamp on the dresser is a gift from Ann’s parents. The two squatting figures are anatomically correct when you lift them up. Ann’s grandkids find them a little scary, so she tucks them out of sight during visits.

As Ann and Mike began contemplating retirement, they were living in Bethesda. They knew the wanted to remain in the Washington metro area because of activities but weren’t certain just where and had never spent any time on Capitol Hill. They found the property in an internet search. As they got out of the car to meet the realtor at the house, there were two families with deep roots in the neighborhood chatting over the fence. The Graces were instantly smitten with the “wonderful community feeling of inclusiveness and friendship.” That feeling keeps them here and happy to be here.