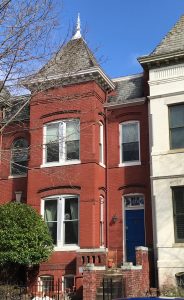 This house reflects the passions of archivist Fynnette Eaton and historian Jim Miller, who made this 1907 home a celebration of art — filled with antiques, ceramics, stained glass, Japanese and Chinese artifacts, contemporary American works, and mosaics in many styles.

Since moving into the house in 1988, Jim has created the mosaics seen throughout the home while retaining the original woodwork. Floors and ceilings are designed to reflect the early 20th-century style. The result is a house that feels like a word-of-mouth, off-the-mall Smithsonian. 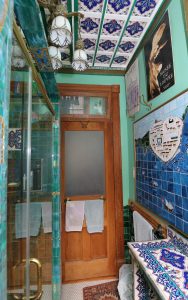 Mosaic derives from the Greek museon (of the muses); at #132, Fynnette is the muse behind the mosaic art. The first mosaic you’ll see is the transom above the front door. In the front hallway is an Alex Katz silk screen; Jim’s mosaic interpretation of Katz’s minimalist style can be seen on the other side the hall.

The living room has original pocket doors and a custom tray ceiling with a Roman-inspired exploding-star motif. Facing the Katz on the left wall is a work by Farhana, a Pakistani American painter whose use of color is reminiscent of mosaic art. Evolution, one of Jim’s works, introduces his muse across about 12 years of a natural change from honey to platinum blonde hair. The vase by the fireplace is a Qing Dynasty recreation of a Ming Dynasty piece. The restored Greco-Roman plate above the fireplace dates to the second century BCE. The two small mosaic tables in the living room are Scan; one is a portrait of the family cat, Corelli, and the other, two birds drinking sacred water, is a scene from a Ravenna, Italy imperial tomb.

The focal point of the dining room is a Federalist table surrounded by four restoration chairs and four refinished chairs; their fronts are inspired by Klimt, the backs feature Arabesque and Greco-Roman motifs (the latter from nearby Dumbarton Oaks). Also hanging in this room are a Salvador Dalí and two Matt Phillips paintings. The hutch is 1920s French Art Deco. The sculpture on the sideboard, Substantial Thoughts, is a modern take on Auguste Rodin’s The Thinker. A semi-finished, full-length portrait of Fynnette faces the hutch.

As you walk to the rear of the house, you can’t miss Ms. Portugal, a ceramic spanning the wall between the dining room and kitchen. Poke your head into the bathroom to see more of Jim’s glass work. 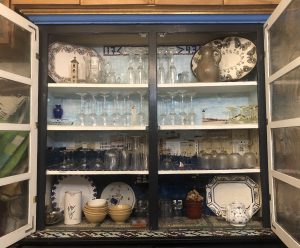 The kitchen takes you to Venice. The century-old cupboard has been refinished with an 18th-century Venetian veduta. The gold mosaic to the right of the cupboard is based on Palermo’s Tree of Life (12th century); the ceiling is inspired by a S Marco floor. Three precisely detailed Timothy Richards’ models support the Venetian theme. Jim built the stained glass doors and cabinets and laid the travertine floor as part of a 2013 remodeling. The rear addition, finished in 1990, replaced a rotted-out enclosed porch. Showtime’s “The Borgias” inspired an exterior mosaic of Lucretia Borgia played on TV by British actress Holliday Grainger. 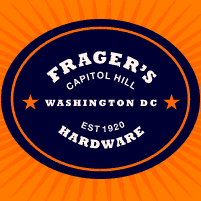 Ascending to the second floor, the glass tiles below the chair rail in the stairway were inspired by Leighton House in London, known for its orientalist interiors. Fynnette & Jim’s Staircase Hanging above is quarter-millennia-old Portuguese Pombal-style wall tile (c. 1760). Mosaic copies of Klimt’s Judith 1 and 2 surround a smaller portrait of Fynnette on the wind-blown Amalfi Coast.

The front bedroom ceiling mosaic began as a major leak in the air conditioning system. Jim covered the damaged ceiling by creating an abstract mosaic and enclosed it with a boundary excerpting the Declaration of Independence.

The shelves below the Japanese screen (c. 1790) on the hallway wall are inspired by those in James McNeill Whistler’s Peacock Room at the Freer Gallery and host both oriental art and small Art Nouveau orientalist statues. 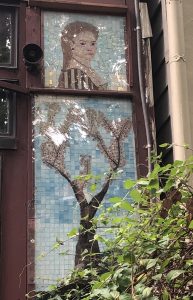 The library recalls Florence, where Jim and Fynnette lived in the 1980s. It is painted in the white and light grey found in the Medici library. On the left wall is a favorite 1980s Pop Art piece by Patrick Nagel. Facing it is a Portuguese wall decoration in the Queen Maria style (c. 1780) together with two Florentine Renaissance art posters.

In the Ottoman-inspired upstairs bath is an original piece imagining Vasco da Gama’s expedition to India as chronicled in the Portuguese epic poem Os Lusíadas by Luís Vaz de Camões. Da Gama never made it as far east as “Katistan,” the home’s Roman- themed guest bedroom, with a custom cat door that affords Corelli a private two-room suite away from

resident dog, Blue. Tucked away in one corner is a mosaic of Fynnette at the Greek ruins of Agrigento, Sicily.