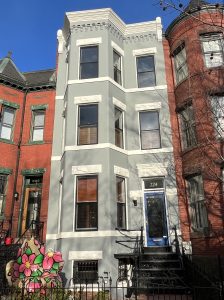 In 1897 Julia Wilson married Benjamin Burch Earnshaw, a clerk. They had three children and lived at 1220 Pennsylvania Avenue, SE, later relocating to 440 Seward Square. In 1904 Julia engaged architect C.E. Webb to design this three-story (plus basement) brick house, built by Samuel Maddox, for her parents, Samuel A. and Juliana Wilson. Julia, her parents, and her daughters lived there with three boarders. Julia and Benjamin are buried at Congressional Cemetery.

Chris and Kara have lived on the Hill since 2009 and purchased this house in 2021. Many of its fine original features can still be seen, including several fireplaces with detailed surrounds. It has 4 bedrooms and 3 full baths, offering abundant living space for the family. Chris comes from a family of collectors. Placed prominently throughout the house, you’ll find fine examples of modern/contemporary art, with an emphasis on graffiti, and artifacts from various countries’ manned space programs.

In the vestibule, a mixed group of mirrors, notably a recently purchased, circa 1800 federal parcel-gilt example from the Peter A. Pfaffenroth collection, reflect the art in the living room. A recent addition is a diorama titled “Art Fair” by Abigail Goldman @tinylittlelives. A gift to Chris from Kara, it depicts the crowd at an art gallery, oblivious to a grisly murder that has just taken place – a commentary on the obsessive nature of the collector and the absurdity of the art world.

Down the hall, is a 110- pound oak door from a jail in England. The date ‘1630’ and other carvings appear on the door – a sample of seventeenth- century graffiti. Chris found this on a trip to England, had to have it, and moved “heaven and earth” to get it safely to Capitol Hill.

Across the hallway is the dining room, home to several pieces from the originators of the graffiti style in New York City in the 1970s and 1980s through modern masters. One of the first pictures that Chris bought is over the sideboard. Entitled MOPAC, the artwork is by DC-born graffiti artist, Tim Conlon. His work was featured in the first Smithsonian show focused on graffiti as a unique artform. A scroll, “Face Girl/Ass Girl”, by Leah Schrager, Glamour  magazine’s Artist in Residence for 2019, “ is over 100 feet long. Addressing the way women are commoditized to suit a male gaze, it contrasts the comments received on her more sexualized social media approach, with a much shorter list from an account with a more modest profile.

In the kitchen, is a signed Andy Warhol print from his ”Space Fruit” series, purchased by Chris’s mother, who served on the Board of the Andy Warhol Museum for 25 years.

On the second floor you’ll find the office, featuring collected pieces of spaceflight history. At the top you will see a NASA brochure from 1967 signed by an astronaut from Apollo 8, 11-14, and 16. One of the highlights of Chris and Kara’s collection is the early model of the Lunar Lander Research Vehicle (LLRV) No. 2 prototype that was likely provided by Bell Aerosystems for the NASA Apollo program, 1964-1966.  It was purchased from the estate of Col. Emil “Jack” Klueva, the only pilot to fly LLRV, No. 2. The nursery is  graced with three original Matisse drawings – and three “fakes” (can you guess which?). The guest room features photographs of large-scale flypaste installations by the French artist JR, who uses his works to bring social awareness. He recently completed a piece in Lviv, Ukraine which was featured on the cover of Time magazine.

A suite with a large bedroom and full bath occupies the third floor.  Note the spectacular views – and the set of stairs that allows the family’s little dog, Tilly, to access the bed. 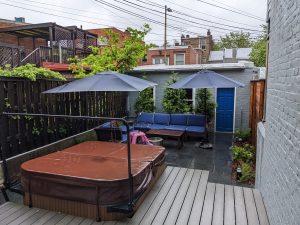