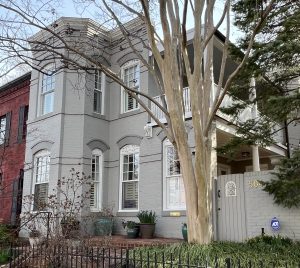 At the first glance this brick bayfront might appear to be a typical nineteenth-century row house, yet on closer examination it is rather exceptional due to its generous side yard and side porches.

As with many nineteenth-century houses the history of this house remains somewhat hazy. Earlier research for house tours in 1975 and 1999(?) found indications of one or two buildings on this lot dating back to before 1877 when building permit records began,  perhaps as early as 1864 or 1872. Further research into deed and tax records will be needed to answer those questions. However, in1886 owner Charles E. Nelson received a repair and alteration permit “for brick addition bay windows”, 30’x18’, 2 story, indicating a major addition to an earlier structure.  The Nelson family appears to have owned the property on the corner of E and 6th streets and developed it over time into four houses, including this one.  The corner house at 601 E Street appears on the 1874 Faetz and Pratt map.  Rowhouses at 603 and 605 E Street were built in 1889, also for Nelson, who lived and died at 504 Sixth Street where his funeral services were held, according to the Evening Star September 1911 obituary that refers to him as a “Southeast Washington merchant.”

As is the case with many Capitol Hill houses this house has been repaired, modified and restored over possibly 150 years.  Owners Charles A. Nichols in 1971 and Terry and Geoffrey Lewis in 1995 undertook major projects to repair termite and other damage and to renovate the house. Through all the changes, the house retains its nineteenth-century flavor while offering modern conveniences.

In 2012 Ms. Preheim moved in and made the house her own. The house, generously lit by south-facing windows and French doors, is full of color. Walls are sparkling with art works collected by Elissa on her foreign travels. Some are connected to her growing up in a family on foreign assignments including time in Haiti.  Particularly interesting are works by Haitian artist, G. Clerge, stylistically reminiscent of Jacob Lawrence.

As with the house itself, old and modern furnishings coexist side by side.  Grandfather’s side-by-side, cabinet/secretary sits across the dining table from a contemporary Japanese silk screen.  Other modern Japanese prints Elissa found in Kyoto on a trip to Japan.  A modern, abstract collage, found closer to home at an Alexandria arts festival, faces the living room fireplace.

Bright interiors make even dark winter days pleasant.  In warmer weather, pleasures of the garden are just outside the door.  The current garden was designed and built by Gary Hallewell of Garden Arts at the time of the 1995 renovations. As with the house, new complements the old.  Valuable mature trees were preserved.  Two crepe myrtles, a spruce, a hemlock, and a photinia are spaced around the garden and a magnificent magnolia sits just outside the dining room.  From the street, the wood gate admits visitors into this quiet garden with a brick path leading to various glass doors and on to the back gate opening to the alley, passing under a wisteria-draped trellis.  There are places here for outdoor socializing or quiet reading and the upstairs porch outside the sitting room is perfect for gazing into the tree canopy with a cup of coffee in hand. 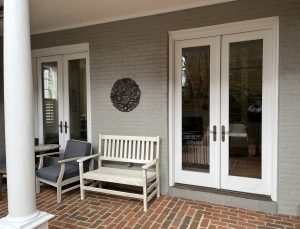