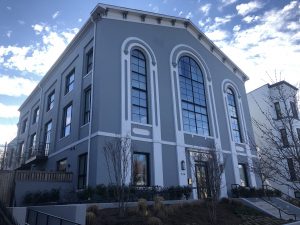 The name of this condominium project is apt – there was a church on this site for a very long time. A small brick church, built here in 1811, was the first Methodist church in Washington City, and was known by various names over time including Fourth Street Station and First Methodist Church. The biracial congregation grew, in spite of losing Black members who, in 1827, formed the Ebenezer United Methodist Church, which is still in its handsome Romanesque Revival Church at Fourth & D streets SE. Built in 1897, it is a stop in the city’s African-American Heritage Trail.

The Fourth Street congregation made plans in the 1850s for a larger building, with classrooms on the ground floor and the sanctuary above. If the light gray paint were to be removed from the Churchill and the present front-door replaced with side-by-side doors set within arched brick surrounds one would see the church much as it was built in 1857 – a dignified brick structure with Italianate and Romanesque Revival elements. The house to the south was erected as a church residence in 1885.

The First Methodist Church sold the building in 1945 to the Mount Joy Baptist Church, a Black congregation that had been worshipping at the old Masonic Hall nearby at Fifth and Virginia Avenue SE. In 1966, an explosion occurred while the building was in use, killing one person and wounding a dozen more. It ripped out almost two stories of the back brick wall. Originally feared to be a bomb, the explosion was later determined to be the result of a faulty water boiler repair. Because of this explosion, DC created its first interagency team to investigate explosions and other disasters.

Repairing the damage from the explosion took almost four years. The building was rededicated in May 1970, in a joyous celebration with about 500 members and guests. The Mount Joy Baptist congregation continued to use the building until 2011, when the buildings – church and residence — were sold to developers and the congregation moved to Oxon Hill, Maryland. The building was renovated by the Altus Realty Group, which also did the conversion of The Maples, the 1795 landmark house at 619 D Street SE. The Churchill opened as residences in 2017 and includes off-street parking behind the building. 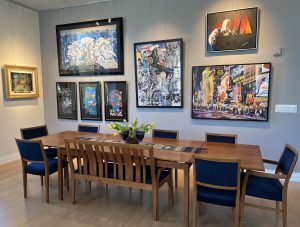 This unit was seen by Margaret and Ted before construction was complete and it was love at first sight. Because work was still being done, they were able to choose the lighter floor color to complement their existing furnishings. (All the other units have much darker floors.) They were looking to downsize from a home in McLean and wanted a condominium so they could travel more. Notice the many photo books on the living room shelves documenting their adventures.

The art throughout the unit has been collected from many places over the years. Margaret and Ted are fans of Jiang Tieng, the founder of the Yunnan School of Painting, one of the most important contemporary movements of abstract art in China. The bronze sculpture of the tiger in the living room and the zebra in the bedroom are by him as well as the prints on the left side of the gallery wall. They have additional pieces of art not on display and are the owners of the landscape triptych in the entry hall of the building in the corner opposite the stairwell. The other residents were happy to share the space.

Margaret and Ted made a few modifications to their unit and were very pleased with the work of local cabinet-maker Peter Hackett. One change was to the kitchen cabinets, which were hung too high for them to be able to fully use. The cabinets were lowered, and a lighted display case was added above, with a railing added for the custom aluminum ladder. The headboard and bridge in the primary bedroom was created to connect the two shelving units from the former home and was stained to perfectly match the older mahogany.

On the other side of the unit, the office boasts floor-to-ceiling bookcases and a built-in desk. Mirroring the kitchen detail, the clever railing and lightweight custom ladder have been included to create more usable space and access. The den/spare bedroom also has a built-in desk and shelves and cabinets. The mirrored wall contains a pull-down Murphy bed! 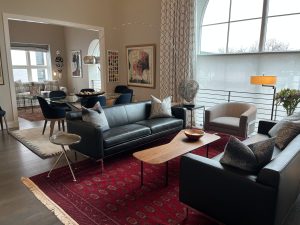 Apartment 301 is the only unit in The Churchill that has been re-sold since development, and the only one with a second floor. Carol, a retired attorney, was looking to downsize from her traditional home in Kalorama and was delighted with both the spacious feeling of this unit and the light provided by the large, arched windows across the front of the building. She decided to scrap almost all her furnishings, aside from artwork, and start over with contemporary furniture to complement the new modern space.

Carol and Bernard have acted as their own interior designers, to wonderful effect. The unit has recently been repainted to add more warmth to the large volume of space. A few other adjustments were made, such as the built-in bookshelves with ladder in the den (also built by Peter Hackett who was recommended by neighbors in the Churchill) and moving the door to the second bathroom to face into the guest bedroom instead of into the dining area. The new bathroom door was created on the same scale to match the rest of the oversized doors. Extra storage was included in the redesign.

Up the stairs is a large loft area – one of the highest perches in the neighborhood. It is used as a study and home office for Bernard, a professor at George Washington University, and as an entertainment center. A mechanical room with storage area fits under the eaves, and an additional finished storage room was added at the rear of the loft.

The domes of the Capitol and the Library of Congress are clearly visible from the apartment most of the year – only in the summer do leaves on the trees partially block them from view.

This home was featured on WETA’s “If You Lived Here” prior to purchase by the current owners.