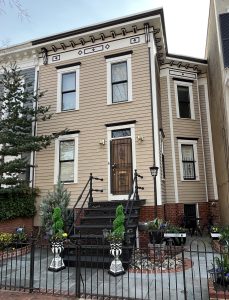 Occupations of the residents of 528 Sixth Street, SE, often reflected their proximity to the Navy Yard. According to city directories (i.e., the Facebook of the nineteenth century) machinist George F. Cunningham lived there in 1877 and in 1881 a brass finisher and blacksmith in the McCathran family was a resident. The Guest family lived there in 1903; Francis was a clerk and George a purser. The basement was rented in the 1920s to a housekeeper and in the 1930s, the second floor, then three rooms and a bathroom, were advertised for rent. For the second half of the 20th century, the Leggett family owned the home. The house underwent a major transformation in 2007, including adding a two-story atrium at the center of the house, a rear and side addition, and a new staircase. Bettilou and Dom purchased the house in 2012 and, after stripping several layers of paint, found the date “1858” penciled on the cornice.

The house’s interior includes sculptures, family heirlooms, and whimsy. Bettilou could host the BBC show ”The Repair Shop”  given her knack for repairing and rehabilitating forgotten pieces. The house features examples of Bettilou’s creative and meticulous eye. She refinishes furniture and antiques, like the table by the front door that displays a collection of vessels: Boston felted wool, brass with turquoise, Hawaiian glass, and La Jolla pottery. She also made the side table by stacking antique mercantile books and painting their pages silver and gold. The owners designed the wood and marble mantels for the gas fireplaces.

Bettilou and Dom’s careers include working in the Senate and government affairs. Bettilou worked for Alaska’s Senator Ted Stevens, hence the many pieces of Native Alaskan craft in the living room, like the baleen basket on the piano and stone bear sculptures.

As you go upstairs, Baldrick the Bear greets you with a display of rock concert tickets and lanyards. Notice Dom’s Italian family portraits on the left and Bettilou’s Scottish family on the right.

In the master suite, sits a 1940s vanity and an early twentieth-century gold-framed mirror—both family heirlooms. Here, Bettilou also has her collection of dolls, including a Revlon Doll and custom-made motorcyclist dolls. (They ride their Harley trike on weekends!)

Moving to the middle of the house you will find the media room off the two-story atrium. Using poster board, Bettilou built a fake wall under the stand to hide the TV cables.

Dom is a Patriots fan, as evident from the signed Tom Brady jersey in the right rear bedroom. Dom’s mom’s art deco dresser needed some repairs, so Bettilou covered some of the panels with grass cloth. The bedroom on the left features more of Dom’s mom’s furniture and Bettilou’s hand-made muppet, a replica of their friend Kevin, who greets guests with a smile.

Downstairs, look up into the two-story atrium featuring three men scaling the wall as well as a giant icicle suspended on braided, 200-lb. wire below the pyramid skylight.

The kitchen island, actually Bettilou’s grandmother’s dresser refinished and topped with granite,  features a natural wood bowl with a terrarium inside. The clock in the breakfast nook is from the owner of Aatish on the Hill restaurant. Over the mantel is a landscape scene, embroidered on a 1954 Singer sewing machine.

The garden stays beautiful all year – it is landscaped with artificial turf and stamped concrete. The basement apartment is not on the tour.