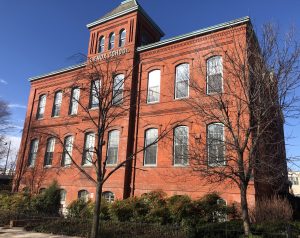 The Lenox School Lofts are filled with American and DC history. Two of Washington’s traditions regarding schools are part of Lenox’s history: public schools were segregated until the Bolling v. Sharpe Supreme Court decision in 1954 and schools were named for presidents and DC mayors.

Walter Lenox served on the Washington city council (the lower of its two legislative chambers) from 1842 to 1843, then as an Alderman from 1843 to 1849, serving his last term as President of the Board of Aldermen. At age of 33, he was elected the thirteenth Mayor of Washington, DC (the first to be born in DC) and served only one term, from 1850-1852. He did not accomplish much in such a short time but was a strong proponent of public education. He joined the Confederacy in Richmond when the Civil War began in 1861. When he returned to DC in 1863, he refused to stop publicly promoting the Confederacy, was arrested and spent 20 months in Fort McHenry until the end of the war. He died in 1874 and was interred in Rock Creek Cemetery.

Lenox School was built in 1887 as a whites-only school and named for former mayor Walter Lenox. By the 1960s, school enrollment in the city decreased and the school system struggled to maintain the surplus buildings, forcing the city to sell many of them for adaptive reuse, including the Lenox School in the 1990s. Row houses were built on the playground and the Lenox Lofts were completed in 2004. The exterior of the building does not hide its original use; note the steps that are uneven from being worn down by many pairs of small feet.

This unit, one of four on the floor, retains much of the original charm of the building while creating useful modern living space. Past the entry hall and utility closet (washer and dryer inside), the main living space is graced with large windows and exposed brick. The main wall is filled with bookcases divided by a cast-iron gas fireplace. The ceiling fixtures help remind you that this once was a school.

Downsizing from her single-family house, Ashley kept the things most meaningful to her. In the foyer, hang a photo of Ashley House in Deerfield, MA (built in 1734); a map of southeast Missouri, the frontispiece to one of her father’s books; and paintings she did in high school. The mid-century modern furniture was handed down from her parents and the Victorian sofa from a great-aunt. The Alabama poster in the kitchen recalls her late husband.

The modern kitchen is tucked on the side – note that the windows are the oversized originals and the ceiling floats away from them, which you will also notice from the bedroom above. A small room, enjoyed by the owner’s granddaughters as a playroom, is tucked round the corner. Another small bedroom and a bathroom also occupy this floor. Steps in unusual places add to the charm of the space.

The main staircase leads up to another bath and a large bedroom tucked under the eaves. This bedroom serves as both guest quarters and sewing room and “shares” the windows from the kitchen below, making it bright and airy. A small “attic” above this room hides the hot water heater and extra storage.

In 2012, Ashley decided to leave her home in Northwest DC and chose Capitol Hill and the Lenox Condo because she wanted a walkable and more diverse neighborhood. Access to public transportation was important to her for both convenience and the environment. And she wanted to get away from the upkeep of a house and yard. She particularly enjoys the light from the tall windows – and her neighbors, whose helpfulness eased the isolation of the pandemic.