You can support the Blue and White Marching Machine (as the band is affectionately known) through the Capitol Hill Community Foundation.  Learn more. 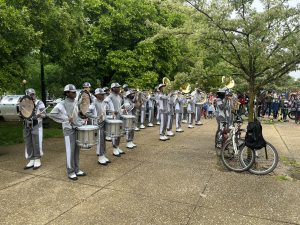 MPD has announced the Eastern HS parade route for Saturday October 8, 9:30 am for the marching band and homecoming court. The parade will start at Eastern HS at around 9:30, head north on 19th Street, west on C Street and North Carolina Ave to East Capitol, south on 11th Street then east on East Capitol to 19th NE.

The following streets will be posted as Emergency No Parking from 2:00 a.m. until 12:00 p.m. and closed to vehicle traffic from approximately 8:30 a.m. to 12:00 p.m. – parked vehicles must be removed from the referenced blocks by 2 AM on Saturday October 8th. :